Do you like watching movies that’ll put you on the edge of your seat? How about being chilled down to the bone, and sweating of anticipation on what’s next? Horror movies are a way people can experience different types of tension, relevance, and unrealism.  Most people don’t like horror movies because they give out jumpscares, and create a creepy atmosphere for you, along with nightmares that may keep you up at night. Do people really see the real morals and intentions behind horror movies? Or do they just see the scary monsters and sounds? There are many ways that the human mind can be stretched and flexed by watching horror movies; and no, I don’t mean your mind actually being stretched or flexed by Michael Myers or Jason Vorhees. Let’s analyze our thrilling scenarios!

To start off, What does horror mean? How can we dive into investigations we haven’t even learned the definition of? The word horror is a noun that means, “an intense feeling of fear, shock, or disgust.” This means that this genre is directed to get our adrenaline pumping. You might ask, what is adrenaline? Adrenaline is.. “a hormone secreted by the adrenal glands, especially in conditions of stress, increasing rates of blood circulation, breathing, and carbohydrate metabolism and preparing muscles for exertion.” Think about when you’re put into a dangerous situation, “You close your eyes.. And hope that this is just imagination. Girl, but all the while, You hear the creature creeping up behind.” (True words from Michael Jackson’s Thriller). There is a zombie right behind you, and you meet a wall, that could only mean one thing; a dead end. This is where your adrenaline comes in, it hypes the body up in situations that may be tense so that we can do the most valuable response to it.

Not all adrenaline choices are logical, but they get their point across. You fight or flight response comes in, are you going to try to physically disable the zombie? Will you try to run past it? Or will you just accept your fate as rotten flesh? Even though you may make the most logical decision now, when you’re actually in the situation, the adrenaline rush inside of you causes us to make not so educated decisions- so next time you’re yelling at Becky not to run into the basement, think about how she’s feeling right now in that situation.

Why did you think we went over those definitions? To grind down to the real meat! Analyze the movie that you’re watching, is it realistic? Most horror movies involve fiction writing, but not all of them though. Most people think of horror movies to be a big cramped genre on it’s own with nothing else to offer. Everything’s the same in horror right? If it scares us, it’s a ‘scary movie,’ it’s not that hard to understand! Believe it or not, all of those statements are wrong. Did you know that some horror movies don’t even involve jumpscares, creepy hospital hallways, or crazy murderers on the loose? There are five horror genres that I’m here to educate you about! After seeing the differences and varieties of horror, you may want to consider a movie to watch after this by yourself, with a family member, friend, or maybe your special other. Thinking outside of the box in horror movie scenes could educate and save your life one day. Here are a few common horror movie recommendations: 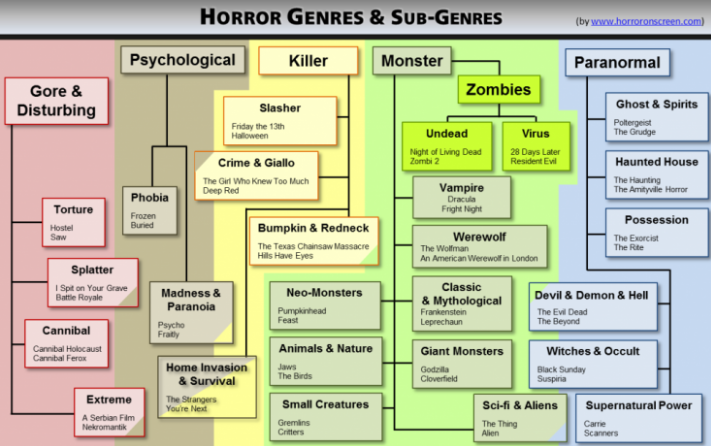